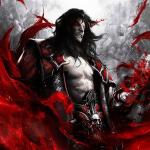 Hello there. I am The Nameless Lancer, but you can just call me Lancer. I'm the admin and bureaucrat on this wiki.

6: Diamonds in the Rough

I am going to be making blog posts about some different things related to Avenged Sevenfold. Be ready for that.

Retrieved from "https://avenged-sevenfold.fandom.com/wiki/User:The_Nameless_Lancer?oldid=5317"
Community content is available under CC-BY-SA unless otherwise noted.